Home   Safer, Better Business in China Didi plans vote in May on delisting from NYSE 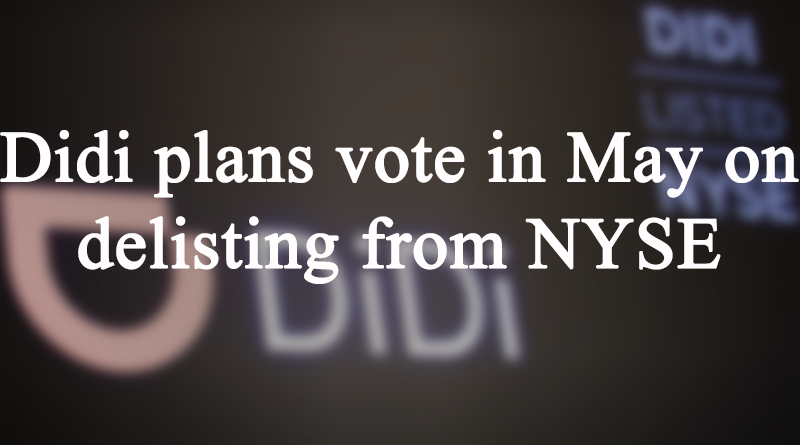 Didi plans vote in May on delisting from NYSE

China's securities regulator said Didi Global Inc's plan to delist from the New York Stock Exchange is a decision which the Chinese company made on its own and that the move is based on the market and its own assessment of its situation.

Didi's delisting has nothing to do with other US-listed Chinese stocks or ongoing efforts between Chinese regulators and their US counterparts to resolve an audit dispute regarding US-listed Chinese companies, the China Securities Regulatory Commission said in a statement on Saturday on its official WeChat account.

The comments came after Beijing-based Didi, the country's largest ride-hailing company, said it will hold an extraordinary general meeting on May 23 to vote on its delisting plans in the US.

CSRC said it has always insisted that overseas listing activities of enterprises should abide by the laws, regulations and supervisory rules of the places where they are listed and where they operate.

It also requires listed companies to effectively protect the legitimate rights and interests of investors, especially small and medium-sized investors.

Didi said in a statement on Saturday it will not apply to list its shares on any other stock exchange before the delisting of its American Depositary Shares from the New York Stock Exchange is complete.

The move is the latest update on Didi's delisting process. The company said in December it would delist from the NYSE and pursue a listing in Hong Kong.

Shortly after Didi's $4.4 billion IPO in late June, China's Cyberspace Security Review Office said it had launched a cybersecurity probe into the company to protect national security and public interest in accordance with the nation's laws.

Song Haixin, a senior lawyer at law firm Jincheng Tongda & Neal Shanghai, said companies such as ride-hailing platforms need to assess their data assets, and protect user privacy, as efforts intensify around the world to beef up legal frameworks for the digital economy.