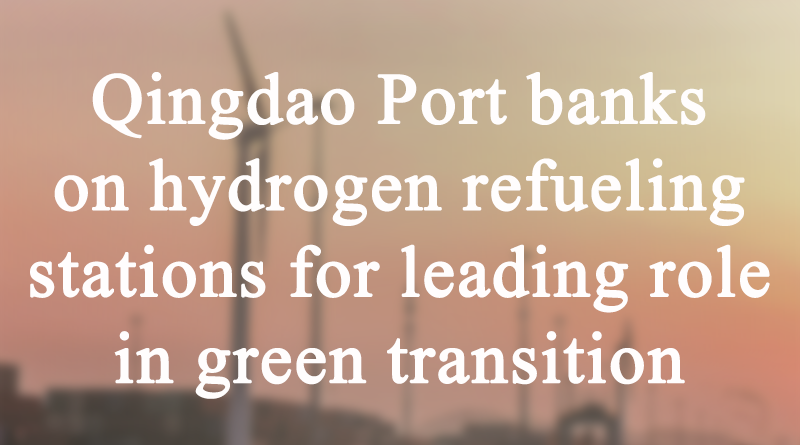 Qingdao Port, a subsidiary of Shandong Port Group and the second-largest foreign trade port in China, is accelerating efforts in green transition by building a hydrogen refueling station to supply clean energy for its operations.

With construction to be completed in March, the refueling station will be the first one that is settled in port areas in China.

The port will focus on future operations of the station and make it a role model among ports that are building eco-friendly ports and seeking fewer emissions, port executives said.

The station project has two phases and is designed for a daily hydrogen supply capacity of 1,000 kilograms, which can serve 50 hydrogen fuel cell vehicles every day. The first phase of the project occupies an area of 4,000 square meters and can reach half of total designed capacity, Song said, adding that hydrogen refueling stations are key to the operation of fuel cell vehicles.

"Just like a car going to a petrol station, it only takes eight minutes to 10 minutes to fill a cell vehicle with hydrogen," she said.

Qingdao Port started three years ago to supply hydrogen energy to container trucks by using relay-tank trucks, the filling of which takes about one hour.

Since June 2020, the port has also used hydrogen fuel cells in moving six gantry cranes at the port's fully automated container terminal, becoming the world's first port to do so.

An estimate by Qingdao Port said leveraging both hydrogen fuel cells and lithium battery packs can reduce power consumption for a gantry crane carrying a container by 3.6 percent, and save about 20 percent in purchasing costs for a single machine's power equipment.

It is estimated to reduce emissions of 20,000 metric tons of carbon dioxide and 697 tons of sulfur dioxide annually, based on an estimated annual cargo handling capacity of 3 million twenty-foot equivalent units.

Building a high-tech hydrogen energy demonstration project is key to promoting smart and green ports in Shandong province, as the demonstration project will accelerate application of hydrogen energy in transportation, industries and household use. The province has also set goals to build more hydrogen-powered ports in the years to come, the port said.

Shandong Port Group said it has planned three to four years for the demonstration project, including three hydrogen refueling stations, a hydrogen-powered energy supply system and 10 hydrogen-powered gantry cranes at the port areas.

According to the plan, hydrogen energy will be used more in loading equipment and vehicles in port areas. At the same time, Qingdao Port also aims to diversify its power mix by exploring other forms of green energy, such as photovoltaic and wind power.

Currently, more than 3,900 sq m of warehouse and rain shed roofs at Qingdao Port's fully automated terminal have been equipped with photovoltaic facilities, which can churn out 800,000 kilowatt-hours of power.

"Solar resource is abundant in the port area and available sunshine duration can reach 1,260 hours annually," said Wang Peishan, a senior technician at the fully automated terminal of Qingdao Port.

Now photovoltaic facilities in the port area have the power generation capability of an 800-kilowatt peak, which is estimated to help reduce 742 tons of carbon dioxide emissions annually, Wang said.

Two 31-meter-high wind turbine generators were also built at the port in January, which is expected to generate 480,000 kWh of power after being put into operation.